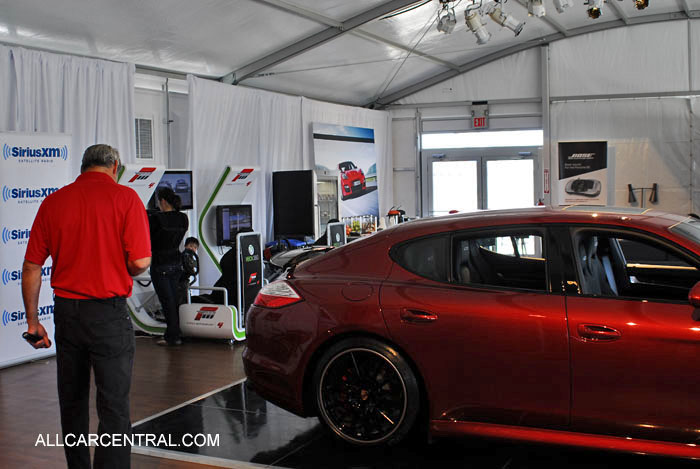 The 2012 Porsche World Roadshow came to the Northern California area on the second weekend of August. The "Show" had already been at 5 other locations since its start last June and has 7 more planed for this year.

I received an email from our friend Tomas Kaliski at the dealership of "Fletcher Jones Motorcars Porsche Of Fremont" California, last month inviting us to the "Porsche World Roadshow USA" tour event. Of course I accepted and we were sent an invitation to attend this unique hands-on driving event.

Porsches' website gives this account of the '2012 Porsche World Roadshow - USA', "an international driving event designed to give Porsche enthusiasts and potential customers the unique opportunity to drive a large sampling of Porsche models for one day in a variety of challenging exercises that demonstrate the vehicles' race-bred ability".

The 'Roadshow' was staged at the old naval air base on Alameda Island, just next to Oakland. The location is interesting as many 'Roadshows' are staged at raceways around the US and Northern California has the great Sonoma Raceway (formally called Infineon) just north of Oakland. We were actually at the same location where the TV Series " MythBusters" film many of their zany episodes. Maybe on second thought, the tie-in with the location and the TV show is evident as the "Roadshow" was about busting some myths about Porsche cars. 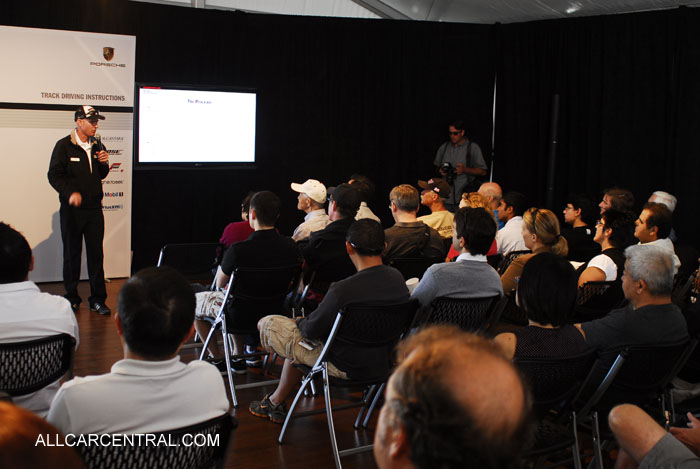 Our hosts, who were Porsche Certified Instructors from the North American Official Porsche driving school based at Barber Motorsports Park in Birmingham, Alabama, opened by saying that "the 'Roadshows' were the Porsche demonstration drive that we all want the dealers to give us, but the one that the dealers are a afraid to do."

The short orientation pointed out some basic driving requirements and outlined the 3 stages we were to take on. Then we were divided to 3 small groups and headed for the shinny new fleet of 2012 Porsche cars. 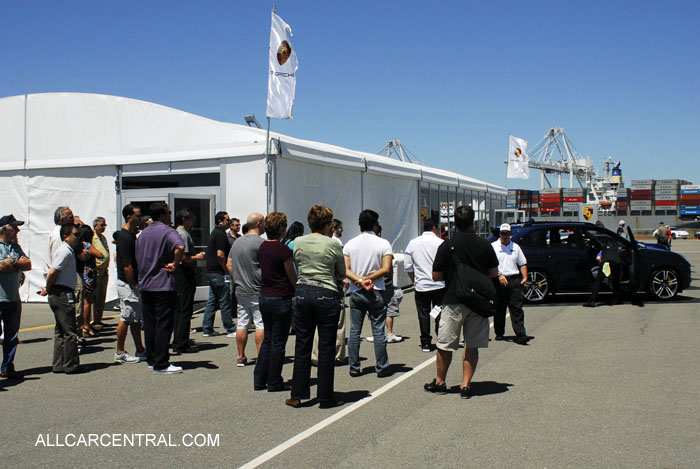 Our group was off to the 'Technology' stage. This was set up to give us a comparison between the 'normal' and Hybrid powered Panamera and Cayenne. We were directed to slam down the peddle and hold it down until we reached the 'braking cones'.

Then at around 25 MPH return through some tight turns. After switching from the 'normal' V8 power and Hybrid powered Panamera I can say that they were quite similar, however, possibly do to a variation in my launch, the V8 powered Panamera felt a bit lighter off the line, which the car is by about 450LB. But the Hybrid has more initial torque and therefore should be equal to or quicker off the line. It was pointed out that the engineers at Porsche were looking to develop equal performance between the two different drive-train systems. The drive opportunity was way too short to really give me a real sense of what each car performed like but the impression was made. There is no big difference. 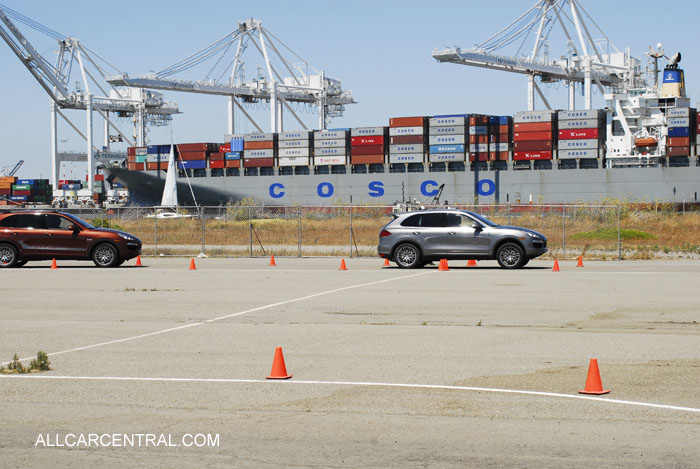 Myth No. 1. Hybrid powered cars behave differently than internal combustion powered cars. "BUSTED".
Other than the first few feet off the line both cars gave the same diving personalities during the test.

Ready to get some 'real' driving done we moved off to the three 2012 Boxster S Porsches that were waiting at the end of a series of cones set out in a left-right tight turn course.

I had driven the earlier generation Boxster and was never excited about the car. The first generation of the 2011 Cayman S (See 'Test Drives") however was a thrill to drive on the twisty Laureles Grade road just outside of Carmel, California. 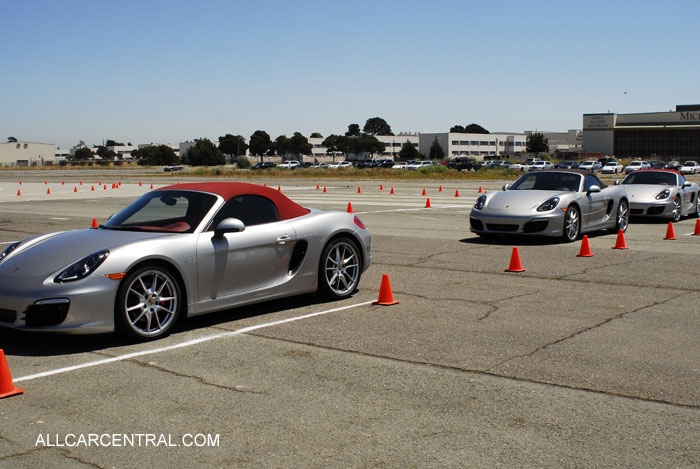 The new Boxster is said to be a totally different car, and I can say that it performed totally differently than the last model I drove. The 2012 Boxster S felt light and quick with ample power in the short twisty course. This is the Boxster that Porsche should have built in the beginning.

My partner Clar, in this romp, loved the Boxster and did not want to stop going around the cones.

Myth No. 2. The Boxster is a bit underpowered and feels heavy. "BUSTED" The 2012 Boxster is very quick and tossable. 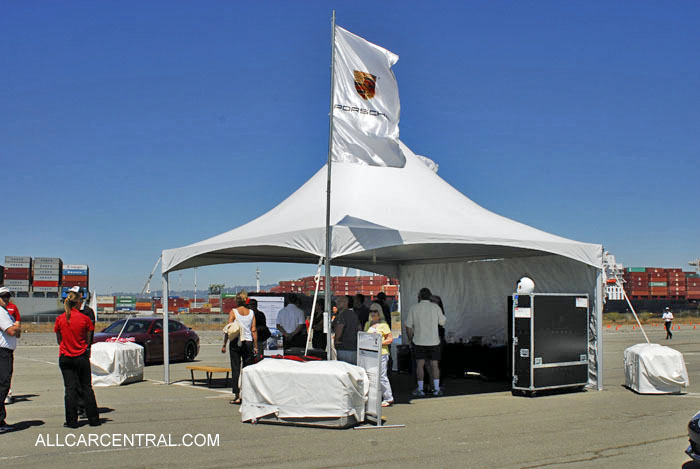 Our group was now all keyed-up and ready for the fast stuff. The Certified Instructors from the North American Official Porsche driving school had set up a bunch of orange cones in a simulated road course that offered us over a 1 mile drive with 2 fast straight-aways rumored to give the maximum of 100MPH at the peak speed before braking. This course was laid out on the dead flat concrete of the airbase and I can not help thinking what it would have been like on the much more interesting and hilly Sonoma Raceway.

We all grabbed a racing helmet and lined up. 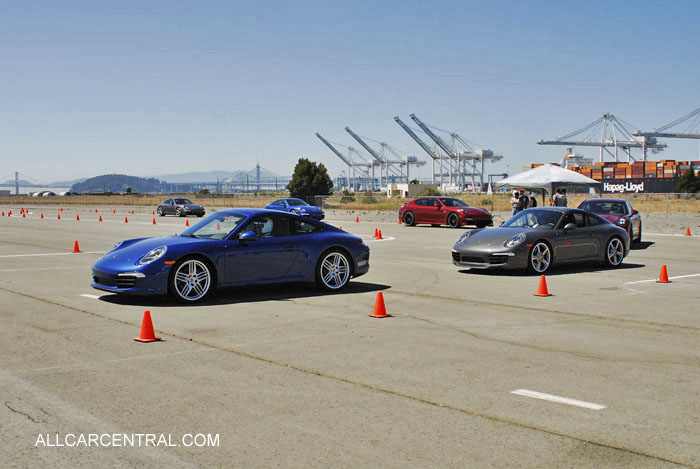 The plan devised by the Porsche driving school instructors was to have 4 cars in 3 bunches. The lead in each bunch had one of the instructors with a radio linked to each of the following cars. The lead car would take off down the track and the other 3 would follow as best as they could. The instructor would moderate his speed so that all cars would be following in a reasonably spaced string. We all went very fast. Keeping up was definitely on my mind. My first drive was the Panamera GTS right behind the instructors car. Standing there looking at the GTS, you can see that it is a well proportioned 4 dr sedan with good seating in the rear. On the go however the GTS felt light, very quick on the take-off and through the turns, giving me a 'head-rush' on the straight-aways.
Wait, was this a GTS or a 911?
After one lap we stopped and moved back one car.

The San Francisco Skyline in the Background 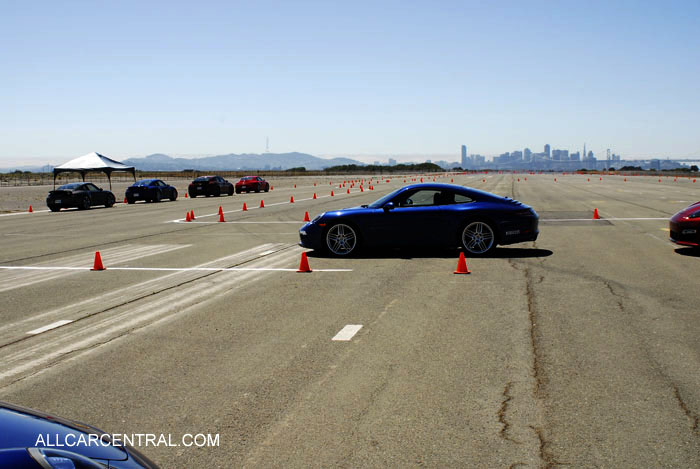 The second Porsche in line was the 911 Carrera. Clar liked the PDK transmission. My 6 speed 997/911 is a bit intimidating for her, although both of her cars are manual shifting cars. The Carrera was set at 'Normal' and Clar put in her best run. At my turn of the Carrera, I left the car in 'Normal' and found that I was losing ground to the GTS on the flat-out straight-aways. This should not have happened so was it me or was that car a bit 'off'?

The next change put us into the 911 Carrera S. It was on "Sport Plus" setting which kept the car in the lower gear until redline was reached. It also gave more exhaust sound. The Sport Plus distracted Clar and put her off on that run.

One of the Long Straight-Aways 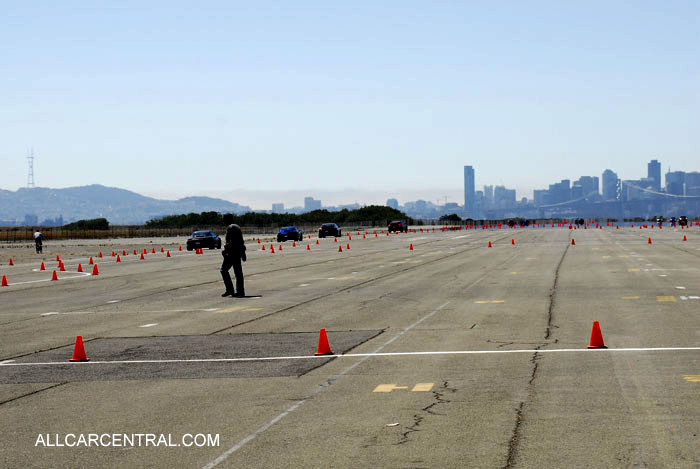 We should have switched this to 'Normal'. But one run, one try. I found the Carrera S with the Sport S setting to be most fun but that was what I had expected from that car. I had driven the 2012 Carrera S with our friend Tomas Kaliski at "Fletcher Jones Motorcars Porsche Of Fremont" dealership last February (See 'Test Drives").

As the speaker at today's opening meeting said, the World Roadshow experience is what we want when we test out a car. Driving a Porsche in a legal manner on the streets and freeways gives one some idea of its personality but not a clue of what the modern car is all about.

Myth No. 3. The Panamera V8 GTS is just a nice 4 door sedan. "BUSTED". The GTS really felt light and quick at all points of the twisty course.

Now that was a road test. We also were treated to coffee and cookies.

Myth No. 4. A normal will adjusted person can exist without a Porsche. "BUSTED". Nope.

AllCarCenttral's apologies to the TV Series " MythBusters" if we have misused the word "BUSTED".